What we know following Tomewan

Mason’s disrespect of Hannibal, his office and Hannibal’s “things” is wearing down on our favorite cannibal. Hannibal even offers Will to go in on the murder of Mason. Jack is growing inpatient with Will’s progress (or lack thereof) in trying to take down Hannibal. Will tells jack that Hannibal is considering taking out Mason Verger and that there will be two witnesses. Jack tells Will that there may be three and proceeds to show Will, Dr. Bedelia Du Maurier. Will goes with Mason, meanwhile Mason has a few henchmen kidnap Hannibal.

Hannibal is being hung over the pig cage at Mason’s farm. Mason tells Will to slice Hannibal. Instead Will cuts Hannibal down. Will is knocked unconscious by Mason goons. When Will awakes everyone is gone and there is a pool of blood beside him.

Hannibal has Mason at Will’s house and drugs him. Under the influence; Mason thinks that Will’s dogs are pigs. Hannibal then convinces Mason to feed the pigs (dogs) his own face. Will comes home to see all of this madness. Mason gets hungry and Hannibal suggest that Mason eat his nose. I think this is where the term cutting of you’re nose to spite your face comes from. As Mason…well you get it. Will tells Hannibal that he is not going to finish off Mason and that he should do whatever he thinks is best for his patient. Hannibal snaps Mason’s neck.

Jack comes to visit Mason to see what happened. Mason tells Jack that he fell into the pig pen and that the pigs did this to him. Will tells Hannibal that their  luck is going to run out. Jack suspects them both as murders and Hannibal should show Jack who he truly is.

What will happen next?

“Mizumono”- Hannibal prepares for his imminent departure with, he believes, Will. Will prepares for a departure of another sort, tying up loose ends, not sure if he’ll survive the trap he’s set for Hannibal. Both men feel that Jack deserves the truth, but what is that truth? Loyalties will be tested and forgiveness will be asked…and the inevitable battle between Hannibal and Jack is upon them.

This series finale things will get heated fast. If you remember from the opening episode of this season. It started of with Hannibal and Jack fighting till blood. When I first saw that I figured that Jack’s big lead to seeing Hannibal for who he really is was would be the murder of agent Katz. A lot of time has passed since then so this isn’t the case. So either Will gives Jack something concrete/ Hannibal admits he’s the ripper (On Will’s suggestion)/ or the trap that Will and Jack set worked which sends Jack into action. No matter how this fight begins, shit is going to hit the fan tonight. Another thing that I have questioned this entire season is, has everyone that died (with the exception of Randall’s murders) been victims of Hannibal’s?

As far a Mason goes I can’t help but to wonder did Hannibal keep Mason alive for Margo, or did his neck snapping just go wrong?

We all may not get the answers to these questions but we can rely on a major cliffhanger from Bryan Fuller. Before Hannibal was renewed, Fuller said he was hoping that this wasn’t the last season because he wouldn’t get to fully “land the plane”. So wheels up Fannibals tonight is going to be a bumpy ride!

Now on with the Food! 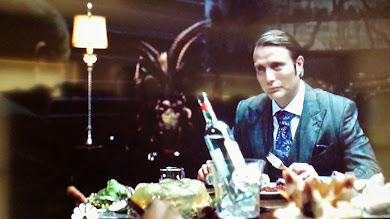 is a Sports buff and now Marvel nerd. He writes for sports (www.DCstands4.com), female issues and now a entertainment website. When he's not fixing the internet that you people break he's playing video games. (as if he couldn't get more dorkier)