The pilot episode of Sleepy Hollow opens with a battle in Hudson Valley New York in 1781.  As the music turns darker, a soldier points toward something while yelling “Crane!”  We then see a masked redcoat soldier riding on a white horse with an ax in his hand.  A bluecoat soldier, who we can only assume is “Crane” at this point, shoots the soldier off of his horse.  The soldier immediately sits up and comes at Crane.  We briefly see the camera focus on his hand with a branded bow on it as he swings the ax at Crane.  We see a look of recognition on Crane’s faces right before the ax slices his chest.  With his remaining strength, Crane swings his sword, beheading the redcoat, then they both fall to the ground and we see darkness.  We hear a male voice say, “We don’t have much time,” then a female voice say, “Ichabod no, no no no! Stay with me please.”

In the next scene, we see Crane busting through some hard mud and rocks waking up as if reborn.  Confused, he stumbles out of a cave into the woods.  He eventually ends up on a paved road which clearly perplexes him.  He misses getting hit by an 18-wheeler only to get side swiped by a car.  Holding his arm, he notices a bird on a sign then runs in the opposite direction in horrified confusion as the driver gets out of the car.  The theme song starts to play and the camera moves over to the bird which is perched on top of a city limits sign that says, “Village of Sleepy Hollow”.

In the next scene, we are introduced to a sheriff and his female partner who are eating in a local diner.  They discuss her going to Quantico.  As they leave, we see the sheriff nod to a reverend.  At the car they get a radio call about horses being spooked.  While investigating, Abbie, the female officer, reports a weapon on the ground then sees a dead headless body of the owner of the house.  Shortly after, the sheriff, who is in the stable, tries to calm down a horse, and then he sees what is spooking it.  It is a live headless body of the redcoat soldier.  The sheriff shoots at the headless man who keeps coming toward him.  We see him swing the ax toward the sheriff.  We are then shifted to the outside of the stable as Abbie is sneaking up to investigate the shots she heard.  She suddenly sees a blade poke through the wood.  The doors burst open and she sees the rider on the horse.  Before he rides off, he stops and looks back at her and we see the familiar scene:  the horse rises up and whinnies with thunder and lightning in the background.  The horseman then turns and rides off into the night.

Able looks into the stable and finds her partner with his head separated from his body.  She radios for help.  A fellow officer, Andy, gets the call right before seeing a suspicious character running in front of his car.  He gets out to arrest the bewildered Ichabod Crane.  In the jail cell, Andy asks Abbie if Ichabod is the man she saw that killed her partner August Corbin.  She says he is not and describes the guy as wearing an old military uniform like a red coat and a branding on his hand.  Ichabod interrupts asking if he carried a broadax and if the mark on the hand was a bow.  She asks when he last saw the guy and he simply replies, “When I cut off his head.”  She asks the man in the jail cell who he is.  As the camera zooms in on his face and the music gets louder, nothing is said, but we in the audience all know his name:  Ichabod Crane.

They set Ichabod up to a lie detector which he, of course, has never seen before.  He gets no spikes as he tells his story of defecting to the command of General George Washington and beheading the horseman after first shooting him.  We see a flashback as he mentions his wife Katrina, a civilian nurse, watching him die from his wounds in the triage.  He says shortly after that, he woke up in the cave.  After his story, in response to his question of where he is, he is shown a dollar bill with George Washington’s picture on it and that 250 years have passed.

Abbie requests to interrogate from the captain, played by Orlando Jones.  He denies her request and assumes, like all the rest of the modern skeptics, that Ichabod is insane.  He does, however, give her permission to transport Ichabod to the institution.  Back at the jail cell, she introduces herself to Ichabod and he asks if she’s been emancipated from slavery. She tells him slavery has been abolished 150 years.  As they drive through the town, we see him get used to his new surroundings like a child by playing with the automatic window.  He sees a building which used to be a stable and is now Starbucks.  He notices that she is wearing pants and asks when it became acceptable for ladies to wear trousers. Through the window, he locks eyes with the reverend we first saw in the diner.  A flashback reveals that it was the reverend’s voice we heard saying “we don’t have much time”, adding another layer to the mystery.  Abbie, still deciding if she believes him, tells him to show her the cave.  After she explains to him how to use a flashlight, he finds a bible that was buried with him.  He reads a marked passage out of the “Book of Revelations”.  It talks about the four horseman of the apocalypse, revealing to us that the headless horseman is the first, and he is Death.  In response to more of Abbie’s skepticism, Ichabod tells more of his story while we watch the flashback.  George Washington told him the revolution was important to more than just the country, but the fate of every person on Earth.  He gave Ichabod a mission to kill a man only recognizable by the mark on his hand.

Next we see a red-eyed white horse galloping hard with his headless rider.  Then we see the reverend closing up the Church, realizing the horseman is headed his direction.  As the horseman gets near, the reverend says something in another language. Chains grab at the horseman but he keeps getting out of them.  The reverend, with a mixture of fear and strength on his face, says he will never tell him where it is and he is prepared to die.  We are then shifted to see through the reverend’s eyes as the ax is swung toward us and we fall to the ground with the reverend’s head.

Abbie pulls up to the crime scene and leaves Ichabod in the car.  Ichabod sees the bird from the beginning of the episode and it leads him to the grave of his wife Katrina.  The tombstone says that his wife was burnt for witchcraft in 1782.  Abbie has just been yelled at by the captain and after finding Ichabod at the gravesite, frustratingly tells him she’s come across yet another situation that she cannot explain and does not understand.  She then takes him to the institution.  When dropping him off in his cell, she reveals a little of her background story and why she hesitates to either believe him or disregard his story.  When she was in high school, she and her sister saw four white trees when walking through the woods.  They heard a voice and saw something that they couldn’t tell was a person or thing.  They blacked out and after waking up to tell their story, everyone said they were crazy.  Her sister could not handle it and eventually end up in an institution herself.

We then see Abbie in Corbin’s office. After emotionally looking at some photos, she discovers a key behind one of them and opens a cabinet with it. She starts listening to tape recorder with her partner’s voice talking about the peculiar things he had found related to the witches and four horseman and that he believes Abbie’s and her sister’s story.  Of course, the captain catches her in the office but not before she grabs some evidence out of the cabinet.

Ichabod, in his cell, looks at the mirror and sees Katrina.  Suddenly he is in the forest with the white trees talking to her.  She tells him that the horseman’s head is in her grave and her body isn’t.  She says that the skull has been guarded throughout time by someone in her coven and we see a flash of the reverend.  She admits to being a witch and tells him he was linked to the horseman because their blood combined after they fought. We see a flashback of them laying on the ground and their blood running like rivers into each other.  She says the horseman was awakened and since he was connected, he was awakened too.  She warns not to let the horseman get his skull and says he is the “first witness”.  She also tells him the horseman is vulnerable to light.  He wakes with the psych staff holding him down trying to sedate him.  Before they get a chance, Abbie enters and reclaims him with false paperwork.

Abbie calls Officer Andy and tells him she knows what the headless man is after and to meet her.  He walks into his apartment cautiously after noticing the door has been broken in to.  He ends up facing the horseman and just when we are thinking he is in trouble, he says to the horseman, “I know where it is”.

While Ichabod digs in the grave, the horseman shows up just when they find the head.  Abbie shoots him away long enough for Ichabod to escape.  Her so-called friend Andy drives up claiming he has called back-up.  He knocks her out and puts her in the back seat.  She bites his thumb and manages to turn the gun on him.  Meanwhile, the other officers show up and try to tell a man who is picking up a gun to put his hands on his head right as they notice he doesn’t have one.  The sun starts to rise so the horseman rides away.

Now that there are witnesses, the captain has no choice but to believe the possibility of Ichabod’s story.  He tells Ichabod and Abbie to find answers.  Right before they enter the jail cell, we see Andy talking to a figure that tells him he has failed.  As Andy asks for another chance the figure knocks his head back and kills him.  After they walk into the cell and see the body, they notice the figure walking away in the mirror through the woods.  As they are looking, we hear Corbin’s voice on the tape recorder talking about the horsemen.  The faceless figure rushes toward the mirror and breaks it as Corbin’s voice names him as Death on the pale horse.  The theme song starts to play as we get one last look at the duo that has been charged to save the world. 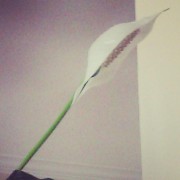